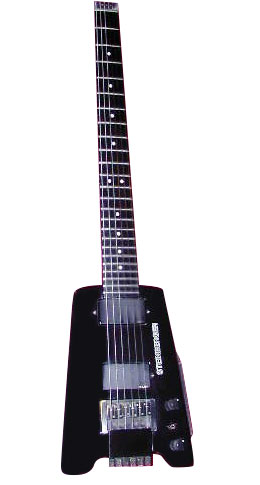 I started playing at age seven. I had tried to persuade my parents to get me a guitar for the previous two years, and finally...on my seventh birthday...there it was: a plastic Eminee. I still have it.

I really loved the music I heard in school, like "The Firebird" and "Fingal's Cave". That was my first record. And the Beatles. I learned to play, listening to that stuff. I had a few lessons when I was about eight, but they had no bearing on the music I listened to, so I quit and tried to teach myself. I always had a love of some classical music and contemporary pop, like The Beatles, Cream, and The Allman Brothers Band.

Around the middle of 1984, the collision of several ideas set me on a course that transformed my musical life dramatically.

By the time I was twelve, I was playing in bands and doing little gigs. I finally got some basic music training in high school. But my playing was way ahead of my formal knowledge. By the time I went to college, I decided I wanted to be a musician, and realized that I'd better get busy making up for lost time. I began studying classical guitar with Alice Artzt in New York City, and what I'll call "advanced harmonic concepts" with Dennis Sandole in Philadelphia. I left college after my first year, with the idea of going to a conservatory. After looking around at schools, I felt that the private lessons I had with these two people were better for me.

So I returned to college and kept up with the private study. I got the formal harmony, counterpoint and music history stuff in school, and the more intensive instrumental and conceptual training privately--once a week to New York City and once a month (with four lessons at a time) to Philadelphia. I stopped studying the classical guitar after four years. I stayed with Dennis Sandole for almost thirteen years. After college, I played in an original rock band for about a year and a half, then decided it was time to try to make a "living" as a musician. I bounced around the New Jersey/Philadelphia wedding band scene for a few years, and eventually landed a steady gig that lasted 12 years. I did some teaching during the week and played gigs on the weekends. That steady gig ended in 2001.

I always wanted to get more out of the electric guitar. I heard it used in all its myriad styles, but I wanted to use it as a serious compositional vehicle. The classical guitar was just not for me. It seemed too limited, and I come from rock music and the ELECTRIC guitar. To me, that's a huge untapped region. The thing is so expressive and can be so varied; It was MY instrument. But the kind of music and scope that I had in mind didn't exist. I had all this western classical music tradition in my background, professional playing experience, and all the Dennis Sandole tutelage. But nothing to unite everything into a single conceptual direction. Then I SAW Allan Holdsworth. I had been listening to him for a few years and really liked his playing and writing. He seemed to have found his own take on the" jazz tune" format, but there was such a European sensibility in it all that really set it apart from the "pack". When I saw him play in late 1984, he used his right hand to add notes to chords in "Tokyo Dream". He only did it in the one tune. In that moment, everything came together. The guitar was a string quartet. The guitar was an orchestra. The guitar was a piano. But the guitar was none of these things. It was really its own NEW universe (See "What Is Black Loam"?). When I got home, I started looking at everything differently. And at my next Sandole lesson, I showed him my "discovery". He sat back in his arm chair and said that he had experimented with this technique long ago. He said he had waited fifty years for a student to stumble on it in a natural way.

I started writing music for two-handed guitar. I wanted to create a literature that would exploit this idea of the electric guitar as a viable, serious instrument. And in the process, explore what it could do and how to play it. Around this time, Stanley Jordan's first album appeared. I had heard him in 1980 at a little gig in Princeton, New Jersey. But the sound and concept that he was presenting were not headed in the direction I wanted to go. So I never gave it a second thought. But at this point, I had found my direction. One that united all my different backgrounds, skills, and aesthetic aspirations. I wanted a place where I could express myself. And this was IT!! 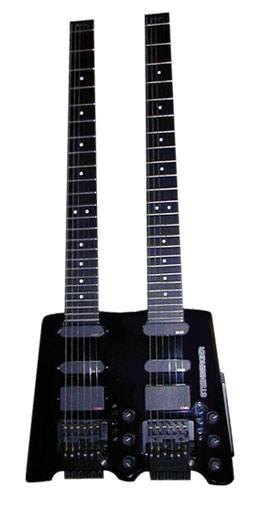 Problems quickly emerged. The tonal weight and dynamic range of a tapped note is much less convincing than a plucked note. The action on the guitar had to be low and the entire instrument had to be lively and clear since every range of the thing was now potentially in play. I found that the amp had to be run with more gain to get the notes to thicken up. But the instrument itself was an obstacle. Then I saw an interview with Ned Steinberger in the December 1984 issue of Guitar Player Magazine. He was holding a Steinberger guitar. This instrument had just been released. A friend of mine named Don Greenwald, who owned a music store in Poughkeepsie, New York, had mentioned that he thought I should try one of these things. He was near the factory, and was friends with Ned. When I SAW the picture of Ned Steinberger holding that guitar, I KNEW!!! That thing was EXACTLY what I needed to make the tapping work. It was stable, so the action could be low and not need constant attention. The sound was powerful, and it was even. All the notes would be clear and usable. I bought one. Together with Ron Ruggiero, a Philadelphia luthier, we found the right action and set up to allow me to play the tapping stuff and still use the guitar for regular playing styles. So now I could use the thing at gigs. I decided to explore standards and pop tunes as a way of developing my technique, and get a set of practical skills together for use on the gig. I created an elaborate set of exercises to help me gain fluency in both the standards and pop playing, and for my own compositions. Now I could function as a soloist the way my piano-playing friends did. I never really liked the standard melody-and-chord guitar style. This approach gave me way more flexibility and was unusual. And it sounded good too.

Other problems emerged. My hands were always in each other's way, although that allows for pull-offs and rhythmic interjections that are really useful. The sounds that the two hands make cannot be separated. You can't have a clean sound for one hand and a distorted sound for the other. So one night on the way home from a gig, I thought of this idea of separate necks. Not separate guitars--that would be too unwieldy. But a double-neck guitar with separate outputs might well solve my problems. Steinberger Sound would not build such a thing. It would be too expensive. But they did make a double-neck out of wood with synthetic necks. I would have to settle for a customized version of that. They built it, and I used it for about five years. Then in 1996, they agreed to make a double-neck out of two of their normal synthetic instruments. They joined them together, and you'd never know it wasn't really one instrument.

That's the basic story. Along the way, I've written string quartets, an octet for winds and strings, some orchestral music, and a lot of music for double-neck electric guitar. Through the magic of computer technology, I can record and disseminate any music I care to write. This approach has allowed me to explore my musical temperament on my own terms and in my own time. Acceptance of this music and approach has not been very encouraging. I think I have a foot in two very different camps. The "pop" guys don't know what to make of the writing or the guitar, and the "serious" guys don't know what to make of the guitar or the writing. The music is an organically conceived synthesis of Bach, Mozart, Hendrix, Beethoven, The Beatles, Duane Allman, Debussy, Charles Ives, Bartok, Dennis Sandole, Allan Holdsworth...just an assortment of great music and musicians. I hope that any listener might see the intent and hear something in it.